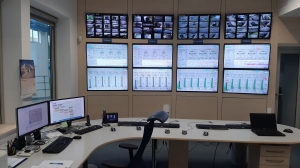 In autumn, HESS completed two major capital expenditure and modification projects. The first project involved the replacement of the control systems at HPP Boštanj and HPP Arto-Blanca, and the second one focused on the reconstruction of the hydromechanical equipment at HPP Arto-Blanca.

As part of the control system replacement at HPP Boštanj and HPP Arto-Blanca, both primary and secondary equipment needed to be replaced due to obsolescence, and the software of the power plant's control system was updated as well. All individual sections were tested at both power plants – the work and testing operations were carried out in line with the hydrological conditions without affecting the generation of electricity in any way. This project has considerably improved the reliability of the two hydroelectric power plant's operation and extended the life of the HPP control systems. The successful completion of the project has been made possible through teamwork by all the project participants. A special thank-you goes to the HSE Invest team, which developed the application software, allowing the HPPs to be started up according to schedule and all the required testing routines to be run successfully.