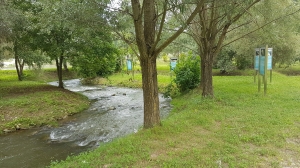 Also known as fish passes or aquatic organism passage facilities, fishways represent mitigation measures which facilitate the passage of fish and other aquatic organisms over various barriers on watercourses, including dam structures of hydroelectric power plants (HPPs). These means of passage allow fish to reach upriver sections where they can feed and reproduce or establish their habitat. At the same time this prevents fish populations from breaking up and declining in watercourses.

The performance of the fishways at the hydroelectric power plants on the lower course of the Sava has been monitored periodically since the very beginning of construction through dedicated ichthyological monitoring efforts in accordance with individual environmental protection approvals. As part of such monitoring efforts, the performance of the fishways at HPP Arto-Blanca and HPP Krško has been monitored since 2009 and 2014 respectively, whereas the monitoring of the HPP Brežice fishway began in 2017. The monitoring of all the fishways is carried out using special fishing nets (keepnets) and electrofishing. These methods were determined as appropriate by the Fisheries Research Institute of Slovenia, the country's umbrella expert institution, which also carries out the ichthyological monitoring of the fishways.

The ichthyological monitoring of the HPP Arto-Blanca fishway has shown that the fishway fully fulfils its function, that its hydraulic regimen is suitable and that it allows the target fish species to pass through it. Based on the results of the sampling using keepnets and electrofishing, the presence of a total of 32 fish species and one species of lamprey was recorded in the fishway during the most recent mandatory ichthyological monitoring run. Of these, five fish species are of European importance as specified in the Habitats Directive, namely the Danube roach, asp, European bitterling, spined loach, and Danube streber. Of the potamodromous fish species, which migrate between breeding and feeding grounds within inland waters, the most commonly occurring is the common nase, followed by the chub, Danube roach, barbel, and asp. Mr. Sandi Kosmač, Sevnica Fishing Club chairman, is pleased with the functionality and performance of the HPP Arto-Blanca fishway: "Our experience with the fishway so far has been positive since it allows fish to migrate freely in order to survive by enabling them to reach spawning and nursery grounds." During the most recent ichthyological monitoring of the HPP Krško fishway, where spatial limitations called for a technical design approach (as opposed to the sustainably designed fishways at HPP Arto-Blanca and Brežice), the sampling using keepnets and electrofishing identified the presence of 15 fish species. It was concluded that the technical-design fishway allows upstream passage mainly to potamodromous fish species living in the area, as well as other species such as the Vimba bream, common bream, riverine brown trout, and silver Prussian carp. Also, the monitoring authority pointed out that the establishment of the HPP Brežice reservoir would cause the conditions downstream of HPP Krško to change, which, in turn, is likely to cause the number of fish entering and passing though the HPP Krško fishway to increase. As part of the first ichthyological monitoring of the most recently built fishway on the lower course of the Sava, the fishway at HPP Brežice, the results of the sampling using electrofishing revealed that the fishway was populated by numerous species along its entire length – the presence of 18 fish species was confirmed and it was concluded that the fishway is passable for fish. Based on the results of sampling using keepnets and electrofishing, last year's ichthyological monitoring identified the presence of 27 fish species, which is up by one-third over the preceding two years. It has also been reconfirmed that the fishway is populated along its entire length. At HESS, we are also pleased with the positive feedback, valuable experience and cooperation from the local fishing clubs, who provide us with assistance in these efforts of ours and contribute to the orderliness and sustainability of the fishways at the hydroelectric power plants on the lower course of the Sava River.