What causes foam to appear on water from time to time? 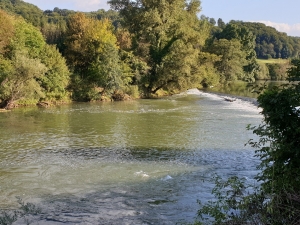 The formation of foam is a naturally-occurring phenomenon, which appears on practically all rivers. In nature, foam appears in places with steps in the river bottom, waterfalls and cascades, and wherever there is strong mixing of river water and air. This type of foam formation is further aided by some surface-active compounds which form in the process of natural decomposition of organic matter (dead plants, algae and aquatic animals) taking place in the water. Much like soap or detergents in the event of water pollution, these compounds reduce the surface tension of the water, allowing foam to form. The foam then captures different natural materials such as sediment fragments, small floating debris, or remains of dead insects. The substance is white, off-white or brownish, and can come in any shade of these colours. It typically has an earthly or fishy smell or the smell of cut grass. Figure 1 shows naturally-occurring foam formation in the river Krka at Krška vas. Foam lines are a visual phenomenon – while some people find their appearance disturbing, the foam is not harmful. Figure 2 shows foam lines on the Niagara River, USA (source: https://titastravels.com/2019/08/15/now-you-know-niagara-falls/).

Foam lines caused by man-made water pollution, however, are typically white in colour, have a distinct smell of soap or other chemicals, and appear across a smaller area and near wastewater discharges or other sources of pollutants which contaminate the water with surface-active substances such as phosphates, detergents or saponins, nutrients and organic contaminants.

In September 2017, the company LIMNOS carried out for HESS a study whose aim was to pinpoint the causes of occasional formation of foam inside the HPP reservoirs in the lower course of the Sava. The study has established that the causes of foam formation on the water are the result of several interconnected factors. In the study, the factors have been categorized as physical, biological, physical, and chemical. Physical factors include the already mentioned mixing of water, such as when water drops from higher to lower ground or when the mixing of water is caused by wind. Biological factors comprise the naturally-occurring formation of gases such as oxygen and carbon dioxide, the former being released by algae and aquatic plants during the natural process of photosynthesis and the latter by microorganisms during the process of natural decomposition of organic matter. Physical factors include the release of the oxygen and carbon dioxide as a result of the change in the water temperature due to the mixing of cold and warm water, since warmer water contains smaller amounts of such gases. Chemical factors comprise the pollution of the Sava with surface-active substances, nutrients and organic matter typically found in industrial and municipal wastewater and in the water that discharges into the Sava from agricultural, urban and other inhabited areas along the river. What all these factors have in common is that they reduce the surface tension of the water and cause foam to form by releasing naturally-occurring gases from the water.

The formation of foam is also sometimes observed during overhauls of grid-connected transformers, when the Sava water runs down over the dam structure spillways. This type of foam formation is more common during summer, when the Sava has lower flow rates. This foam is caused by the factors described above, and not by the water or anything else being discharged from the hydroelectric power plants. The foam forms as large amounts of water are released over the HPP dam structure spillways, causing the water to mix turbulently. During such spillovers, the water is saturated with oxygen due to the presence of algae and the summer conditions. The difference in the temperatures of the headwater (above the spillways) and the tailwater (below the dam) as they suddenly mix causes naturally-occurring gases to release from the water. Also, during summer the water contains higher quantities of surface-active substances of natural origin as it is. All this reduces the surface tension of the water and, by capturing gases in the upper layers of the water column, causes the formation of foam, which, as noted above, is more of a visual phenomenon – one that is in fact harmless.